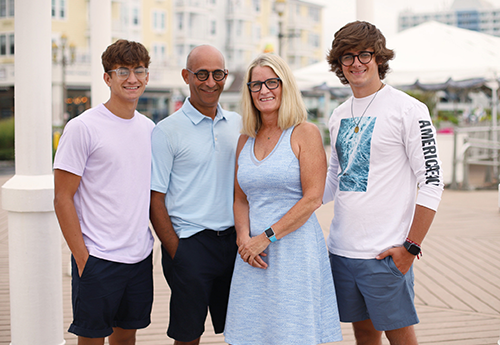 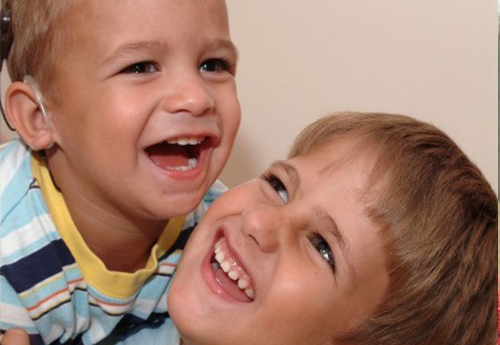 Both of my children, Ethan (20) and Gavin (17), have the recessive genetic condition Usher syndrome. They have type 1, which means they were both born with profound sensorineural hearing loss, have retinitis pigmentosa (causing tunnel vision and eventual blindness), and vestibular dysfunction.

At first, having 2 children with a genetic disorder that involves multiple sensory losses did not allow for much time to think about anything other than finding the appropriate professionals and then attending the therapy and follow-up appointments that were necessary. I was really just trying to get through each day and doing what was essential to help my children develop and thrive. It was my goal to help them build their confidence, find their inner strength, and develop the fortitude to work hard to succeed and achieve their dreams. Like many, I have had my share of frustrations with the professionals and the system, and dedicating time to researching and advocating for my children.

My journey to working for change in communities and groups started in the early 2000’s, so the internet or social media wasn’t what it is today - and screenings were not the norm. With my husband’s help we eventually found what we needed. Along with meeting their physical and educational needs, we were looking for the social-emotional aspect as well. First, we wanted to be a part of parent groups that focused on opportunities for our children to socialize with other children like them and for us to have the opportunity to be around other parents who are on a similar path. Meeting others who have a shared journey is a powerful and vital resource. Eventually, I started to look for groups that included parents and professionals, those that offered conferences and more opportunities to learn about best practices and new innovations. I certainly appreciated the professionals we had in our lives, but I was looking for as much information as I could to further develop my children’s skills. After all, much of our time was spent outside the professionals’ offices, so we needed as much support as possible to put what we learned into practice when we were on our own. I enjoyed attending panels and being able to hear what other parents and/or adults living with Usher syndrome had to say. And then I was asked to be on panels to share my journey. I wasn’t really looking to do that, it was just a natural progression going from wanting to find the support and resources needed to help my children to then being given the opportunity to share what I had learned with other parents and caregivers. From panels, I went on to speak to different groups that included professionals, teachers, and students.

The next natural progression for me was involvement in advocacy and awareness groups. I volunteered to become an Awareness Advocate for the company that made my children’s cochlear implants to help families who were making a decision for cochlear implants for their child. From that, I was offered the opportunity to be employed part-time as the Cochlear Awareness Coordinator for Canada. I was asked to speak at a couple of fundraisers which led to creating a charity golf tournament to raise money for organizations that were important to our family.

As these opportunities were coming my way and I was a part of many different groups, I still didn’t recognize that my involvement was putting me on the path of becoming a Parent Leader. The term Parent Leader was not heard a lot, even within parent groups I was a part of. I was still working as a Special Education teacher, and considered myself an educator in terms of employment, and outside of work, as a parent advocating for my children.

Then in 2010, I was approached to be a Board Member for the very well-known and large Children’s Treatment Centre in Ontario, Canada, where we were living at the time. My children had worked with many of the professionals across several regional locations for this center. I was very intimidated by this opportunity and wondered what I could possibly have to offer them.

This was my first experience where the term Parent Leader was used and it was suggested that my voice as a parent would be valuable to the Board of Directors who were overseeing a center that treated children. That seems so obvious now. This role added to my confidence and led me to seek out other roles and choose to serve on different groups when offered the opportunity. When I moved to New Jersey and left teaching full-time, these roles gave me the confidence to apply for a job as a Project Director for an advocacy group, which I have been doing now for four years. I joined the Board of Directors for a non-profit Usher syndrome organization, became a Volunteer Ambassador for another, and I am on the Advisory Board of a national initiative for another organization. I also facilitate an Advisory Group and two different parent groups, one for support and one for identifying parent needs statewide.

Throughout this journey, the key for me was finding the groups that interested me. All of these experiences challenged me to add my voice where it is needed, even if it felt out of my comfort zone at first. I’m glad I have been able to use my voice to represent parents in communities of change.